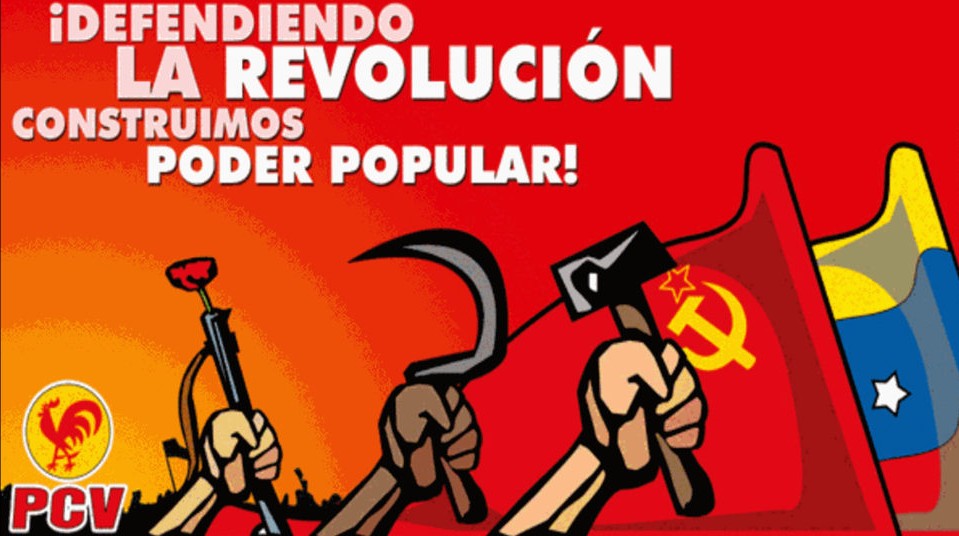 In a statement the Political Bureau of the Central Committee of the Communist Party of Venezuela (PCV) denounces the anti-communist slanders launched by the deputy of the governing United Socialist Party of Venezuela (PSUV) Pedro Carreño against General Secretary Oscar Figuera in the National Assembly.
Below you can read the statement of the PCV in English and Spanish:

On behalf of the PCV and the revolutionary left coalition, he spoke out strongly against a draft statement backing the recent agreements between the government and the pro-imperialist extreme right in Mexico. The statement was intended to be unanimously approved in the parliament. The intervention of Comrade Oscar Figuera, who is also the PCV Central Committee’s general secretary, was once again censored by state television stations (VTV and ANTV) that broadcast all of the other deliberations that took place in the National Assembly. These stations cut off their live broadcast from the Federal Legislative Palace just before the communist deputy was due to speak, preventing anyone who was not present at the session from knowing what he said.

Such blatant, repeated and systematic violation of the right to information no longer surprises anyone in Venezuela, although it does cause outrage. However, the direct aggression against the PCV and its deputy reached an unprecedented level in the parliamentary debate on this occasion when Figuera concluded his speech and Deputy Pedro Carreño (PSUV) took the floor to accuse Figuera of being a “CIA mole” who was “on the books of the US State Department.” Carreño’s intervention was, of course, televised.

For the PCV it is clear that the absurd and slanderous statement from the gentrified Carreño against Deputy Figuera, as well as other statements frequently uttered by Deputy Jorge Rodríguez and other members of the ruling elite, are actually part of a sustained attack against the Communist Party and the forces which came together in the APR since last year. These attacks are not accidental nor do they correspond to a moment of heated debate. Rather, they are part of the escalation of a systematic attack against the party of the Venezuelan working class which seeks to discredit and stigmatize its firm and clear position against the surrendering and neoliberal course assumed by the government and PSUV leadership. The PCV’s position is expressed not only in the National Assembly sessions, but in all the activities carried out by the party, its Communist Youth and our mass political fronts, with the purpose of clarifying the scenario for our working people, who are the victims of the crisis of dependent and rentier capitalism, the illegal and criminal sanctions imposed by Yankee and European imperialism, and the government’s anti-working and anti-popular policies.

In this context, the Political Bureau of the PCV’s Central Committee repudiates the abominable accusations irresponsibly launched against Figuera and denounces the development of an anti-communist plan which looks to promote irrational hatred against the Venezuelan communists and, in particular, against our deputy in the National Assembly. In the parliament, which is dominated by rightwing forces both in government and in opposition, the PCV deputy shines out as being the only one who raises the voice of the working class and the working people to denounce the handing over of the Venezuelan nation to our enemies and the destruction of the people’s rights to satisfy monopoly capital, a policy which is disguised as being part of a false struggle against the imperialist blockade and coercive measures and which is being carried out behind the backs of the majorities.

Let the world know: no slander or defamation against the PCV will be able to cast any shadow over the clean trajectory of anti-imperialist, anti-capitalist, class-conscious and revolutionary struggle of our Party. Our people know that Venezuelan communists defend with honesty, simplicity and combativeness the interests of the working people against the criminal tricks of Yankee imperialism and its lackeys, as well as against the betrayal of the bureaucrats and new reformist rich who today negotiate with the country’s enemies to preserve their privileges at the cost of sacrificing the popular majorities.

The anti-communist defamation, preceded by the well-known media censorship, highlights the dangerous authoritarian, anti-democratic and anti-popular tendency that is consolidated in the political practice of those who hold power today. This practice comes amid a manipulation of a far-fetched pseudo-revolutionary rhetoric and in the context of negotiations with the upper bourgeoisie, imperialism and the new elite. This new elite has emerged under the protection of irregular and uncontrolled administration of public funds, all while wages were destroyed, collective agreements dismantled, job insecurity and deregulation imposed, worker struggle persecuted and prosecuted, landowners favoured over poor peasants, and public companies destroyed and sold as scrap metal to private capital. At the same time, capitalists are being exempted from paying taxes and the people are subjected to VAT and dollarized hyperinflation, and transnational companies are being offered our wealth and our sovereignty with a semi-slave workforce through the law of Special Economic Zones.

With outrageous accusations, threats, blackmail and criminalization against revolutionaries, as well as against worker and peasant leaders, the leaders of the government and opposition right defend the pact between Venezuela’s two main bourgeois fractions: the fraction associated with the US monopolies and the fraction of the so-called “revolutionary bourgeoisie”, that is, the parasitic bourgeoisie related to the current government which is in charge of liquidating every vestige of the Bolivarian progressive process initiated by President Chávez.

In such circumstances, which remind us of the unpunished, antidemocratic and anticommunist actions of the pro-Yankee governments of Betancourt and Leoni in the 1960s, we reiterate our call to the working class and the working people of the city and the countryside to fight in defense of national sovereignty, for the rescue of our violated rights and to recover the tarnished popular dignity by accumulating forces for a revolutionary solution to the deep capitalist crisis. In the same way, we call on the international communist movement to double down on its solidarity with Venezuelan communists and with our working people in the face of the threats that loom against the revolutionary forces as bourgeois fractions and their political representatives agree on governability in favor of the ruling classes.