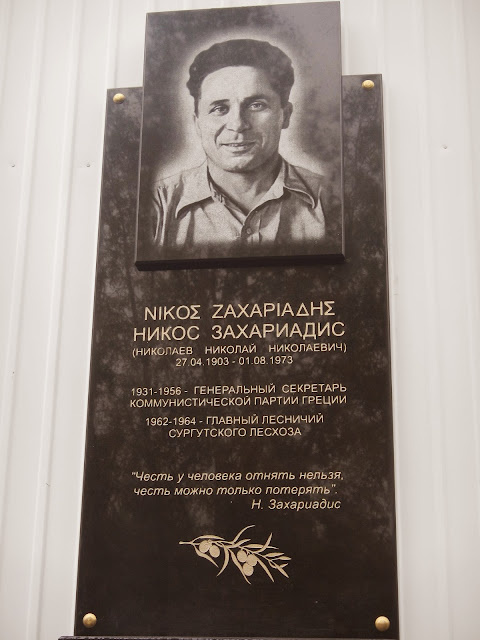 A. The first two versions

In the first days of August 1973, when the Soviet authorities and the Khruschevian Florakis leadership announced that Nikos Zachariadis died, two different versions of his death were immediately formulated. The first and the official one was presented by his executioners, the social-democratic Brezhnev-Florakis leadership: “On the 1st of August Nikos Zachariadis died from heart attack at the age of 70” (Announcement from the CC of “K”KE). The second one was supported by the overwhelming majority of Greek communists (more than 95%) who rejected at once the version according to which Nikos Zachariadis died from “heart attack”, regarding it as a KGB fabrication, and believed that he was murdered by the Khruschevian revisionists (Soviet and Greek) in Sorgut, Siberia, his place of exile.

B. The third version, of “suicide”, or how the soviet revisionists and the social-democratic clique of Florakis-Tsolakis-Koukoulou et al. contradict themselves

Seventeen years after the initial “announcement” of the Soviet authorities, Alexander Petrushin, a KGB Colonel, sent a note to the newspaper “Tiumenski Izvestia” in which he contradicted the original version and presented a third one, that of “suicide”: “the General Secretary of the CC of KKE, Nikos Zachariadis, did not die from heart attack, as it has been known until now, but he committed suicide by hanging himself on the 1st of August of 1973 in Sorgut, Siberia, where he was in exile under the name of Nikolai Nikolayevich Nikolayev” (“Rizospastis”, 9/12/1990).

It is obvious that these two versions of Nikos Zachariadis’s death, the one of “heart attack” and the other of “suicide”, are mutually exclusive and, therefore, false.

The treacherous social-democratic cliques of Brezhnev-Florakis, the actual executioners of Nikos Zachariadis, flatly contradict themselves. When were they telling the truth, in 1973 or in 1990? In both cases they were, obviously, lying in order to cover the crime they committed, that is, the murder of Nikos Zachariadis, a crime that even the Nazis did not dare to commit.

The Khruschevian revisionists’ second version, the one of “suicide”, is anyway without a basis because: a) communists do not commit suicide and under no circumstances would Nikos Zachariadis, as a communist leader, do such a thing because his philosophical outlook was that of revolutionary Marxism-Leninism-Stalinism, i.e. the militant philosophy of revolutionary class struggle and, moreover, he had never advised any communist to kill himself but to fight until the end sacrificing their very life for the interests of the working class, the cause of the proletarian revolution and socialism-communism; b) Nikos Zachariadis “committed suicide” exactly like our people’s hero, the leader of the trade-union association, Dimitris Paparigas whose own murder was presented by the Greek State Security as a suicide committed allegedly using his pyjamas’ cord.

C. The murder of Nikos Zachariadis

The overwhelming majority of Greek communists correctly reckoned, and still reckons, that the Soviet revisionists were the ones who murdered Nikos Zachariadis following an agreement with and a demand from the treacherous clique of Florakis-Loules-Tsolakis-Koukoulou et al. in order to maintain the existence of the social-democratic “K”KE whose presence and action served, on one hand, the foreign policy of the revisionist-capitalist Soviet Union and, on the other, the interests of the indigenous reactionary bourgeois class acting as its agency in the ranks of the Greek working class movement.

It was not a coincidence at all that the heinous crime of Nikos Zachariadis murder was committed on the eve of political “change” in Greece. The Soviet revisionists, due to their collaboration with the American imperialists, were aware that a political “change” is imminent in Greece, namely the replacement of the military-fascist dictatorship by a bourgeois “democratic” government. If the new government wanted to maintain its democratic faηade, it had not only to legalise the revisionist “K”KE but, also, to allow the repatriation of the communist political refugees, the former DAG partisans, from the revisionist countries. However, it was known to both the Greek and Soviet revisionists that the great majority (about 85%-95%) of the Greek communists were staunch supporters of Zachariadis and, upon their return to Greece, would immediately raise the issue of his liberation from exile employing all possible means including daily demonstrations in front of the Soviet embassy and an international campaign. Under such pressure, the Soviet revisionists would be compelled to set him free and let him return to his homeland.

Consequently, under these circumstances that were beyond their control, and aware of the great authority Nikos Zachariadis enjoyed among the Greek communists, the Soviet revisionists of the Brezhnev anticommunist clique decided to murder the great communist leader and former member of the EC of the Third International in accordance with the agreeable opinion and demand of the social-democratic Florakis leadership. The reasons behind this decision were directly linked with the consequences the return of Nikos Zachariadis to Greece would have: a) the inevitable downfall of their instruments in the country, that is the liquidation of the two social-democratic parties “K”KE and “K”KE-in due to great influence he had on Greek communists b) the reorganisation of the communists and the formation of the revolutionary massive KKE, guided by revolutionary Marxism, that is of Leninism-Stalinism, and the concomitant preservation of the antifascist, anti-imperialist EDA party (that was liquidated by the revisionists and replaced by, the harmless to the interests of the bourgeois and the imperialists, PASOK) c) the prospect of a revolutionary KKE in alliance with the socialist Albania would be very dangerous, at that time, to the fate of Kruschevian revisionism in Europe, to the existence and activity of the Soviet and European revisionists.

In addition to the above, what shows that the third version of Nikos Zachariadis death, i.e. the one of his murder, is correct and convincing are the following:

First, the statement-confession made by Stavros Zorbalas, the director of the Centre of Marxist Studies, in 1980: “How could there be a Party (meaning the revisionist “K”KE) if Zachariadis would come to Greece?” (D. Vyssios: “Open letter to Boris Nikolayevich Panomariov, former head of the Department of International Relations of the CC of CPSU) but, also, by Panos Demetriou: “at any rate, only a KGB report can solve the riddle concerning his death” (“Ethnos”, 29/12/1990).

Second, the very important testimony of the journalist Vera Kuznechova in her interview: “I brought G. Mauros (Greek journalist) in contact with competent persons like Zachariadis’s guard and the forensic doctor who, under pressure, wrote falsely in his report that Nikos Zachariadis died from heart attack. When I talked to him, he admitted that he had diagnosed assassination, no heart attack”

Third, the statement made by Natalia Tomilina, the director of the Russian State Archives, in the spring of 2000: “Not all evidence pertaining Nikos Zachariadis has been published and, especially, the documents related to the circumstances of his death. These documents have been classified as top secret and no access to them is allowed until they are declassified.” (Lefteris Apostolou “Nikos Zachariades”, p. 15, Filistor, 2000).

But the fundamental question arises here: if the case of Nikos Zachariadis death was drawn to definite close with the establishment of the “suicide” version, why, then, the part of the Archives related to the circumstances of his death is not published? Why the documents about the circumstances of his death are, still, classified as top secret and no access to them is allowed?

It is evident that the anticommunist Khruschevian revisionists and their fascist secret services, even after more than three decades (1973-2006) and despite continuous “editing”, cannot render their Archives plausible as to the second false version of Nikos Zachariadis death, the one of “suicide”.

The above statement of the director of the Russian Archives makes the version of adopted by the exiled Greek communists even more convincing. According to this version Nikos Zachariadis was murdered by the Kruschevian-Brezhnevic leadership having secured the consensus of H. Florakis who “even if he did not ask for this himself”, as the veteran communist Nikandros Kepesis wrote: “at any rate, H. Florakis was the instigator of Nikos Zachariadis’s murder”.

This article was published for the first time in the newspaper “Anasintaxi” issue 232 (August 2006), in Greek, as addendum to an article of c. Nikandros Kepesis entitled “The murder of Nikos Zachariadis“