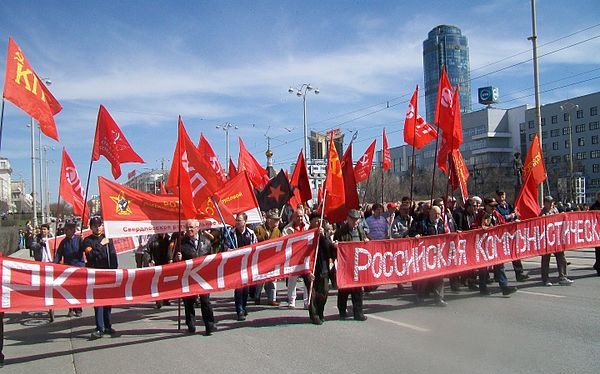 In a statement titled “No to fascism! No to imperialist war”, the Russian Communist Workers’ Party (RCWP) refers to Russia’s invasion in Ukraine, stressing out that the actual aims of Vladimir Putin’s government is to “strengthen the position of imperialist Russia in the world market competition”.

“Neither the Russian authorities nor the US and EU leaders pay much attention to the working people. We have no doubt that the real aims of the Russian state in this war are imperialistic”, the statement of the RCWP states. The Party acknowledges that “the source of the conflict is the inter-imperialist contradictions between the US, the EU and Russia”, adding that “the goal of the more powerful US imperialism is to weaken its Russian competitor and expand its infuence in the European market”.

The Russian Communist Workers’ Party regards as “legitimate” the protection of the people of Donbass against the Kiev regime, but underlines that the aid to Donbass could be used by “anti-Soviet” Putin as a pretext in order to develop “a completely predatory war” with the occupation of other regions of Ukraine by Russian troops. In such a case, “we will regard this as a war of conquest, imperialism and we will not support any of the imperialists”.

In any case, the RCWP states, “not the masters but the workers will die on both sides. To die for class brothers is worthy, but to die and kill for the interests of the masters is stupid, criminal and unacceptable”.

The RCWP, which has been banned from elections in Russia, has hailed the recognition of the so-called “People’s Republics” in Donbass, a position that the Party has advocated in the previous years.

In the end of its statement the Party reaffirms its position against the relapses of fascism, noting that only the path that leads to socialism can put an end to wars. “The common struggle of the working people against the bourgeoisie of all countries is the main strategic line of our parties”, the statement concludes.